Washington, D.C. Nightmare As Metro Trains Collide– As Many As 7 Dead and Over 70 Injured

Probably the favorite rail system in the United States, the Washington D.C. Metrolink system is now the focus of one of the worst rail crash cases in history. The Wall Street Journal reports 9 dead and as many as 70 injured in Washington D.C. when two Metro trains collided at 5 P.M. just before peak rush hour crowds. The crash occurred on the Red Line between Takoma and Fort Totten. The train in the rear actually mounted the rear of the front train. 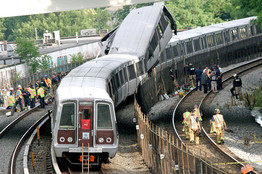 The D.C. Fire Department reports 9 dead and over 70 injured as the toll rises. As reported in the Associated Press:

The District of Columbia Fire Department has raised the death toll to nine in Monday’s collision of two Metrorail trains.

A release on the department’s Web site says rescue workers located three more bodies in the wreckage late Monday night. All three were declared dead at the scene.

One Metro transit train smashed into the rear of another at the height of the Monday evening rush hour. The trailing train jackknifed violently into the air and fell atop the first.

Initially, six people were confirmed dead, including the operator of the trailing train, Jeanice McMillan of Springfield, Va.

The National Transportation Safety Board is on the scene investigating. The collision is of a type known as "telescoping," where a following train overtakes another train and mounts the roof and collapses into itself like a retracting telescope. Telescoping occurred 1996 when a Metro operator was killed and happened again in a Metro crash in 2004 Woodley Park near the zoo. The crash of the Red Line today ranks high as the worst tragedy in railroad cases in this part of the country according to the Wall Street Journal:

"It’s as horrific as you can imagine," Washington Mayor Adrian Fenty told reporters. "Literally one car of the train is squeezed almost completely together."

Metro’s Mr. Catoe said this type of crash is rare. He suggested at least one of the trains was operating automatically. Trains Tuesday would be run manually by conductors at speeds slower than normal, he added. The train that caused the crash is one of the oldest types run on the system.

For those of us who travel to Washington, D.C. and its environs, The Metro is a major pleasure. However criticism of its safety record has been mounting as the number of derailments and crashes mount. For instance a 2004 crash occurred because officials concluded that the Metro operator was asleep as the train rolled backward for 78 seconds and slammed into another train in the Woodley Park station, injuring 20 people and causing $3.5 million in damage.

Rick Shapiro a railroad injury attorney with the firm of Shapiro, Cooper, Lewis & Appleton has been studying railroad injury cases for years in this area and has reported on this crash:

Although my firm has no relationship with Shapiro, Cooper, Lewis & Appleton I do refer clients with cases – particularly railroad injury cases – to them because of their long history of experience with these cases and their efforts to advocate safety and prevent railroad accidents like the tragic events of today on the Red Line. And Wayne Parsons Law Offices follows these National News Stories on our Website.

You may find resources from Rick Shapiro and John Cooper helpful in investigating this tragedy:

Our ties with the railroad date back to the very founding of the firm. Our founder served as a trainman/conductor for the NS/Norfolk and Western Railway Company and a UTU union official before receiving his law degree. His experience on the railroads allowed him to bring unique perspectives to his railroad legal practice, including the safety and wage concerns of those who are in the vital business of keeping the trains moving. Richard N. Shapiro, one of our attorneys, is the co-author of “Railroad Health & Safety-A Litigator’s Guide,” one of leading treatises on railroad injury law, found in the nation’s law libraries (72 Am. Jur. Trials 1). Also, Richard N. Shapiro and John M. Cooper have both served as officers and the Chairman of the American Association for Justice Railroad Section, the largest group of the nation’s trial attorneys.

These tragedies can be prevented if the advice of safety advocates like Rick Shapiro and John Cooper are consulted. They know what went wrong and how to fix it. Unfortunately it is too late for the tragic victims of todays railroad crash on the Red Line in Washington, D.C.

How Long Will It Take to Resolve My Car Accident Claim?